Wade and cast where a river runs through it. Whether you’ve dreamed of Montana fly fishing for years or you’ve yet to cast for the first time, you will not be disappointed by the opportunities on our namesake Rock Creek. Four miles of private access and pristine river frontage on this freestone mountain stream boasts seven species of fish: Westslope cutthroat, rainbow, cut-bow, brown, brook, bull and the Rocky Mountain whitefish.

Rock Creek is famous for its spring salmonfly hatch, as well as additional hatches including mayflies, golden stoneflies and caddis fly. It’s also known for phenomenal fishing conditions and fish populations early spring through fall. Our licensed and trained fishing guides are excited to share their professional expertise and personal passion for fishing. They go above and beyond to ensure that your fishing experience is both enjoyable and successful.

A Blue Ribbon fishery is a designation made in the United States to identify recreational fisheries of notable high quality. There are only five states in the U.S. with waterways that have been given the official Blue Ribbon designation: Michigan, Missouri, Montana, Utah and Wisconsin. Blue Ribbon status is based on water quality and quantity; water accessibility; natural reproduction capacity; angling pressure; specific species; and congressional approval. 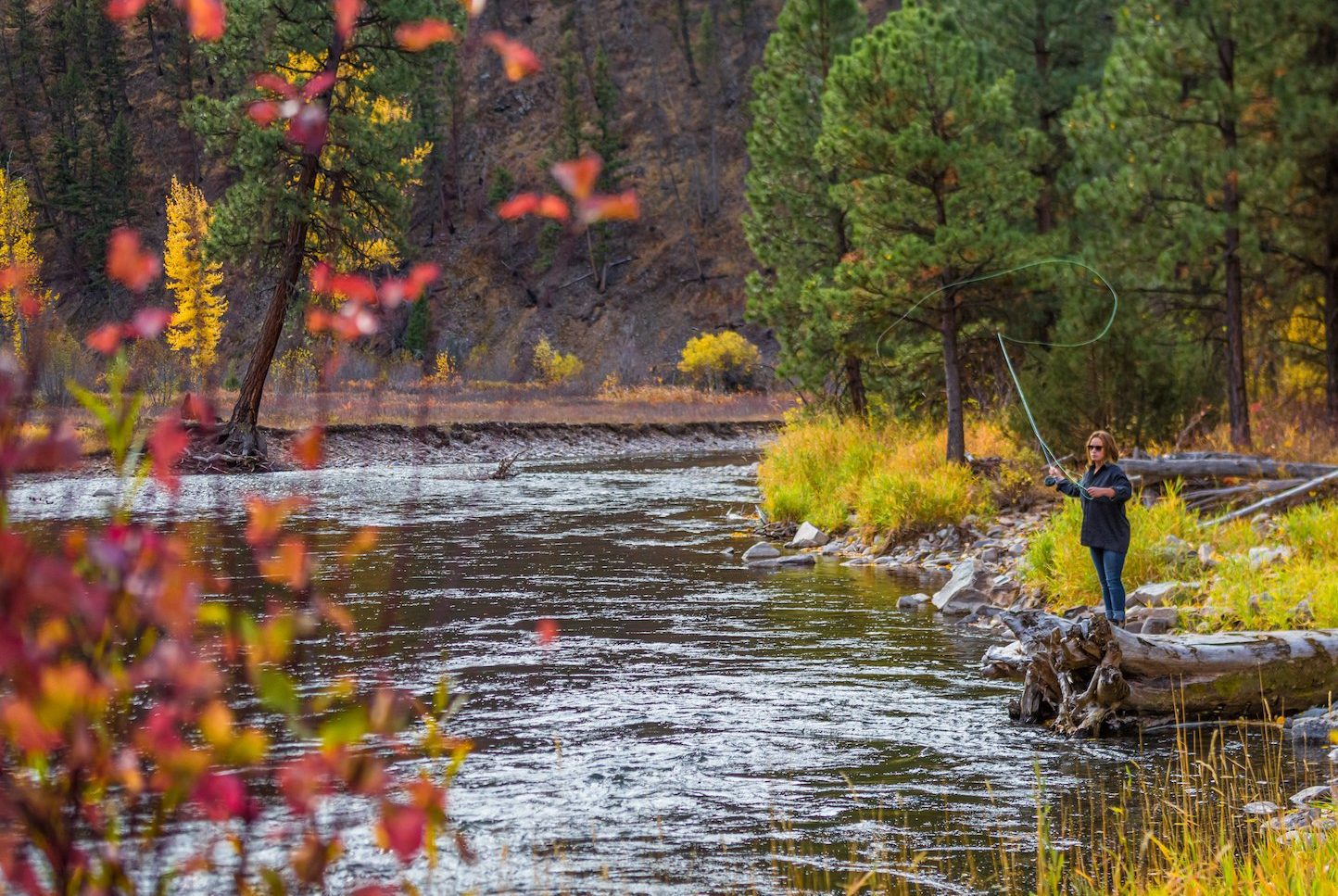 Each day of fishing begins at the Rod & Gun Club, where you are outfitted with our top-of-the-line collection of rods, reels, waders and flies. Pull up your waders and venture into the stream for a two to three-hour fishing adventure on Rock Creek. To ensure preservation of the sport, The Ranch asks that all guides and guests catch and release all trout they hook while on Rock Creek and during off-site excursions. Our experts advise on how to hunt for the perfect fishing hole—so you can enjoy solitary, as well as guided fly fishing. 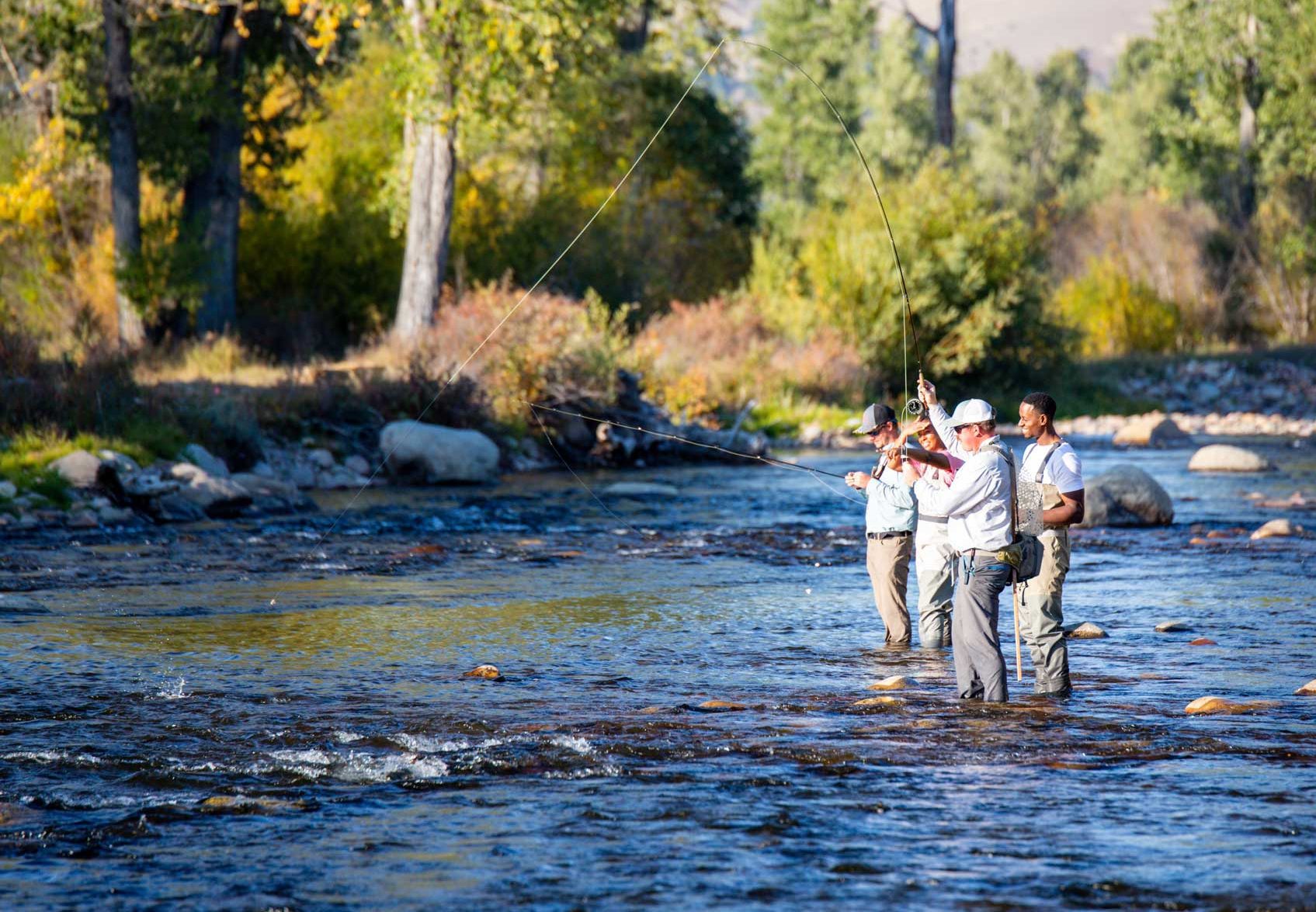 Before heading out on the water, all guests receive personalized casting lessons and riverside instruction from our outstanding guides. Whether perfecting a double haul, casting into a gusty wind or simply getting back to the basics of a steeple cast, every guest will walk away with improved ability. Catching a trout on your own personally handcrafted fly is extremely rewarding. Learn the art of fly-tying with our guides before hitting the water. Guests discover how to wrap hooks with thread and materials to fool a clever trout. 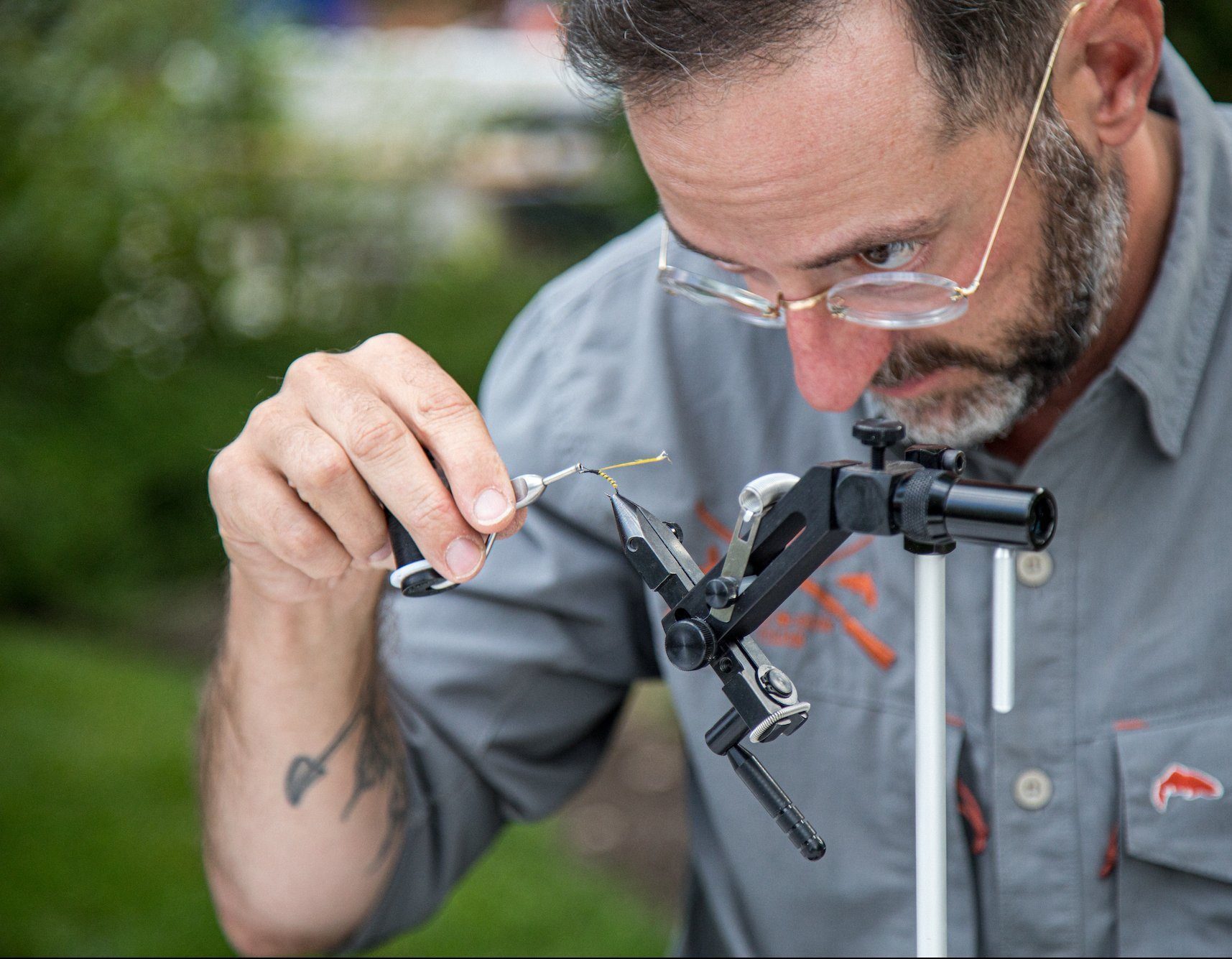 Wisdom from the Wild

From Our Activities Concierge

“I love to fly fish and had John, Phil, and Eli as my guides for this trip. We caught so many fish and I continue to learn from each of them. ” 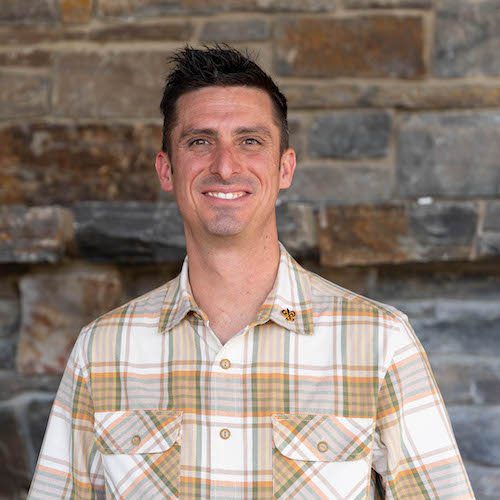 “Fly fishing is special at The Ranch because our guides are true lovers of the sport and they love sharing the experience. They're not only the best anglers but they're also the best teachers and can cater the experience to those that want to put a fish on the line or master the technique.” 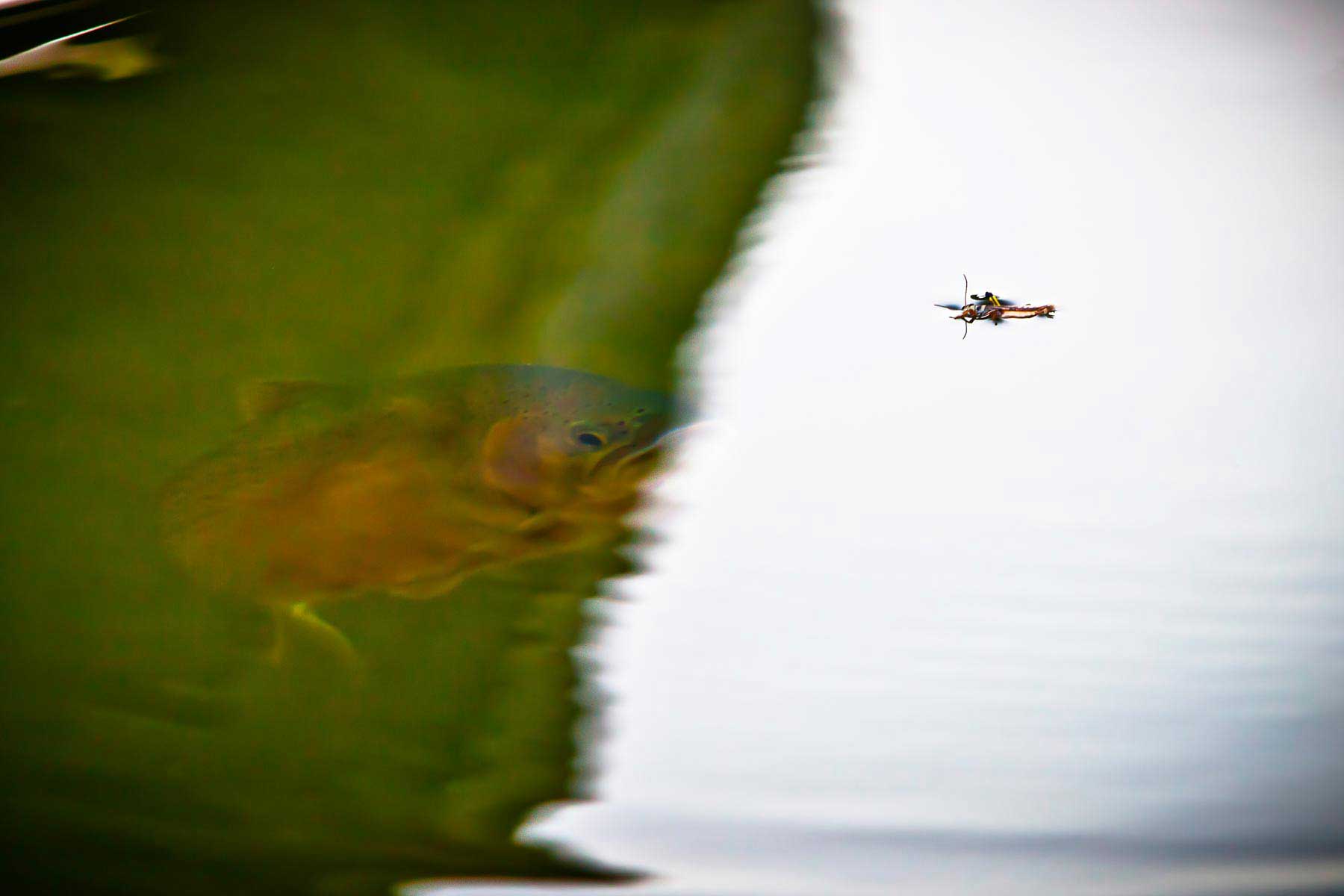 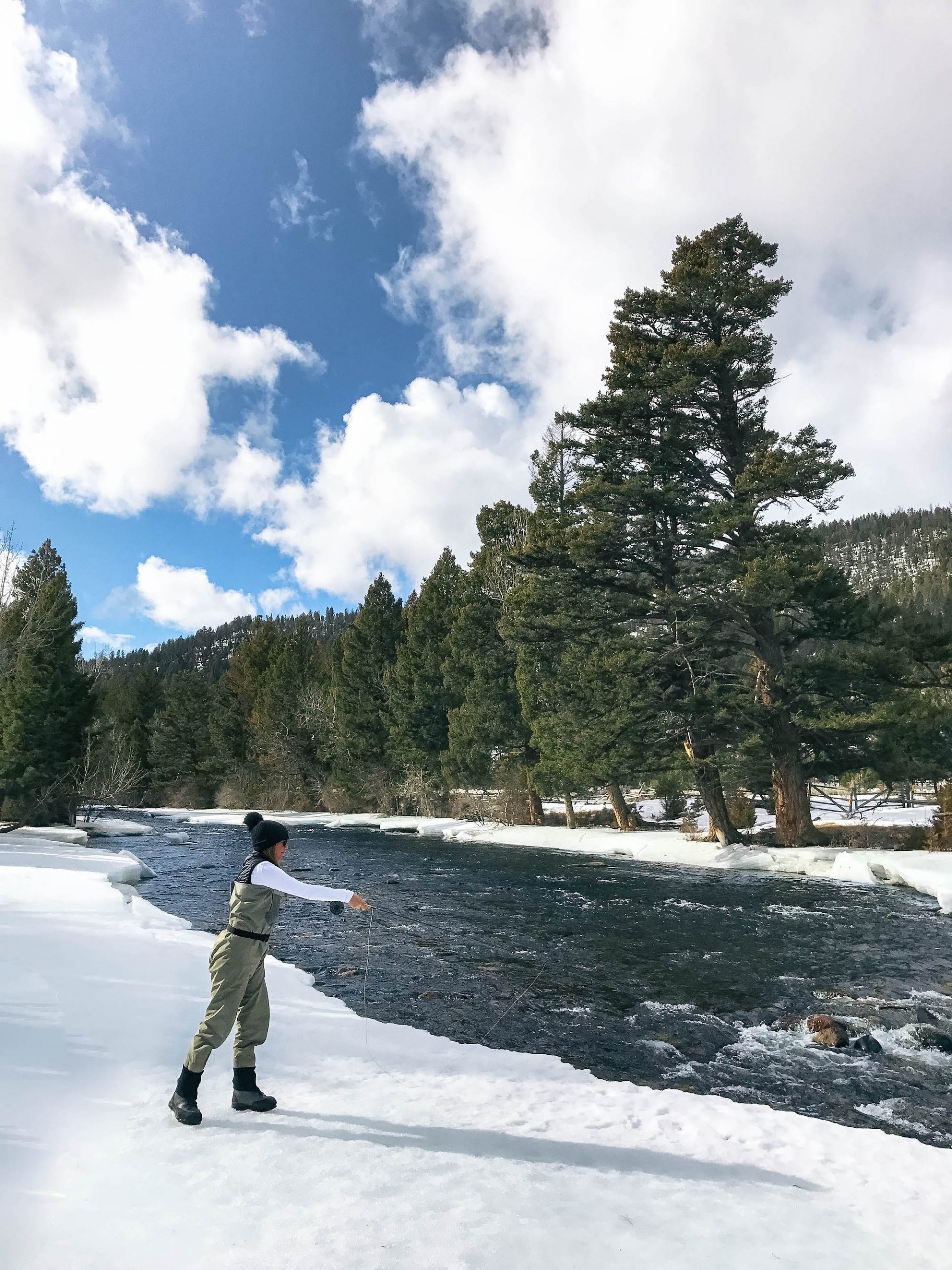 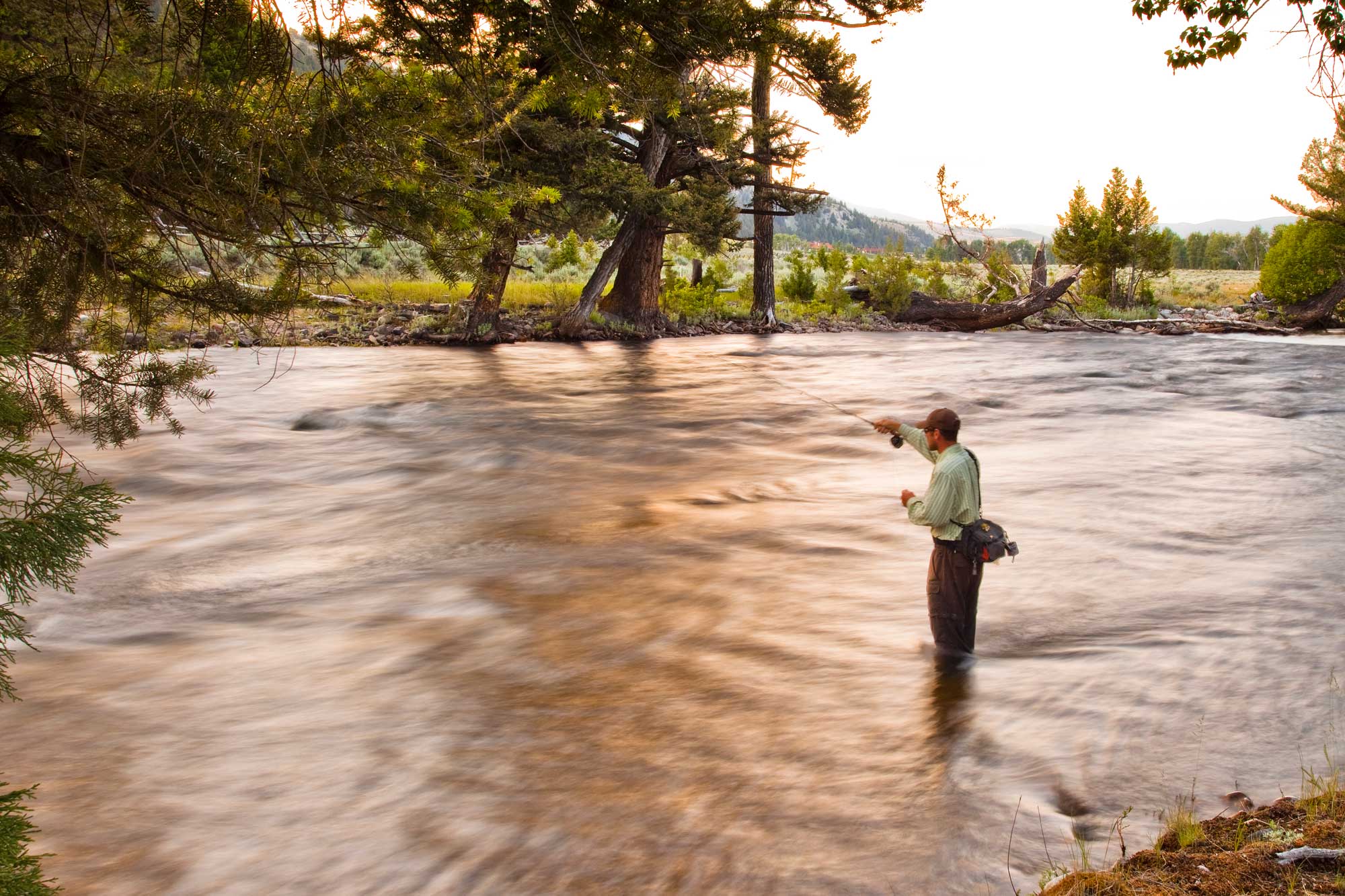 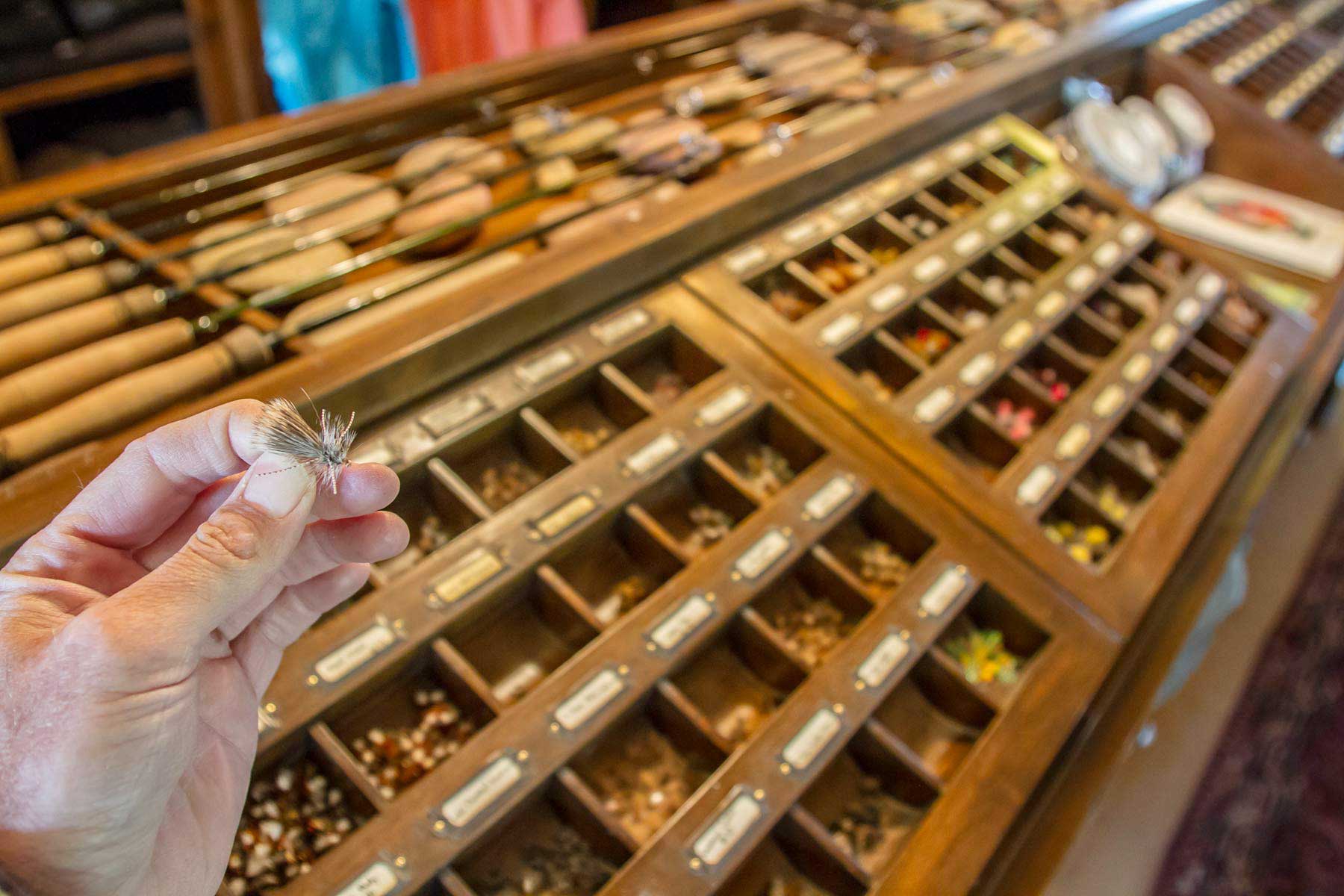 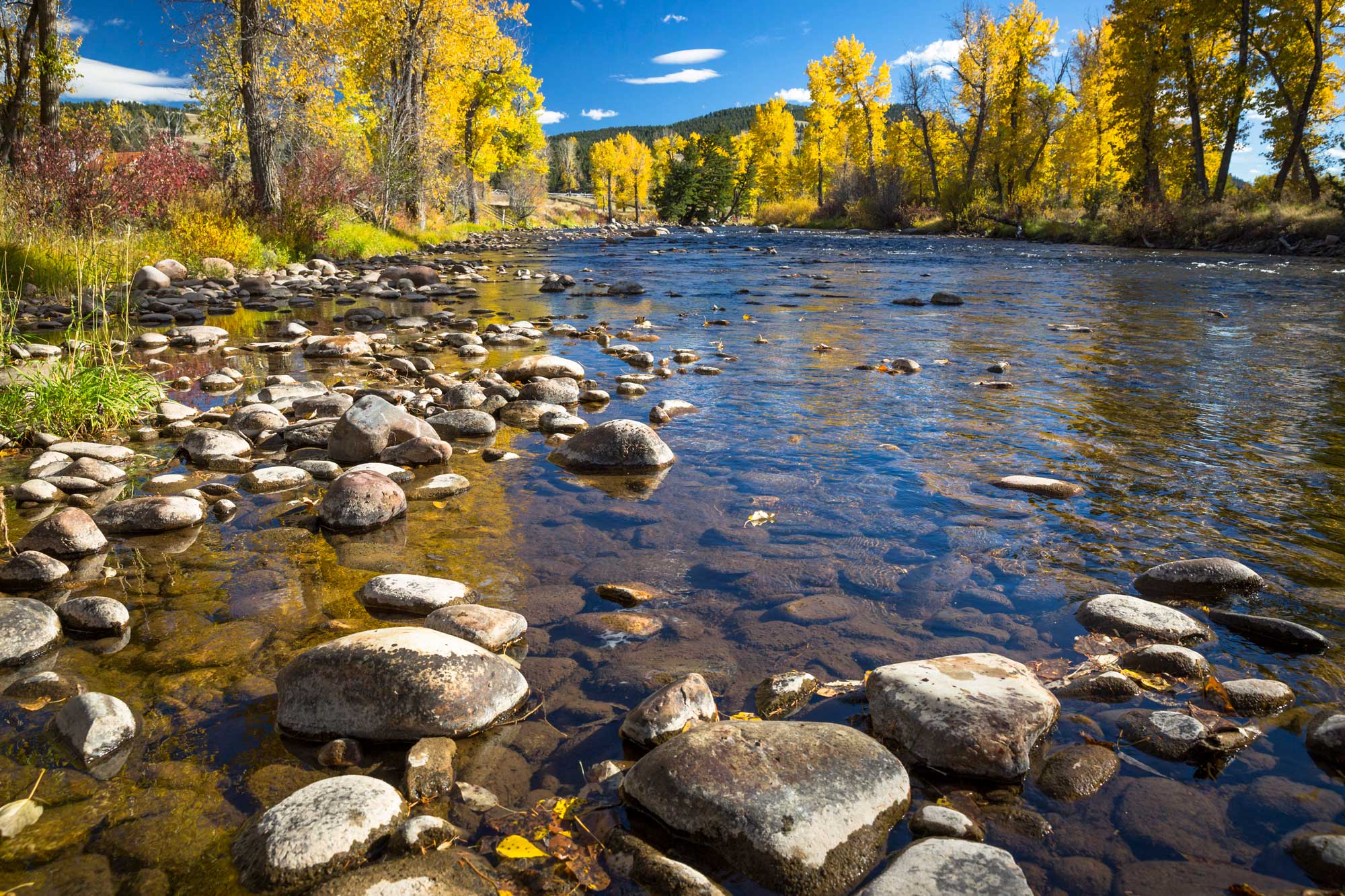 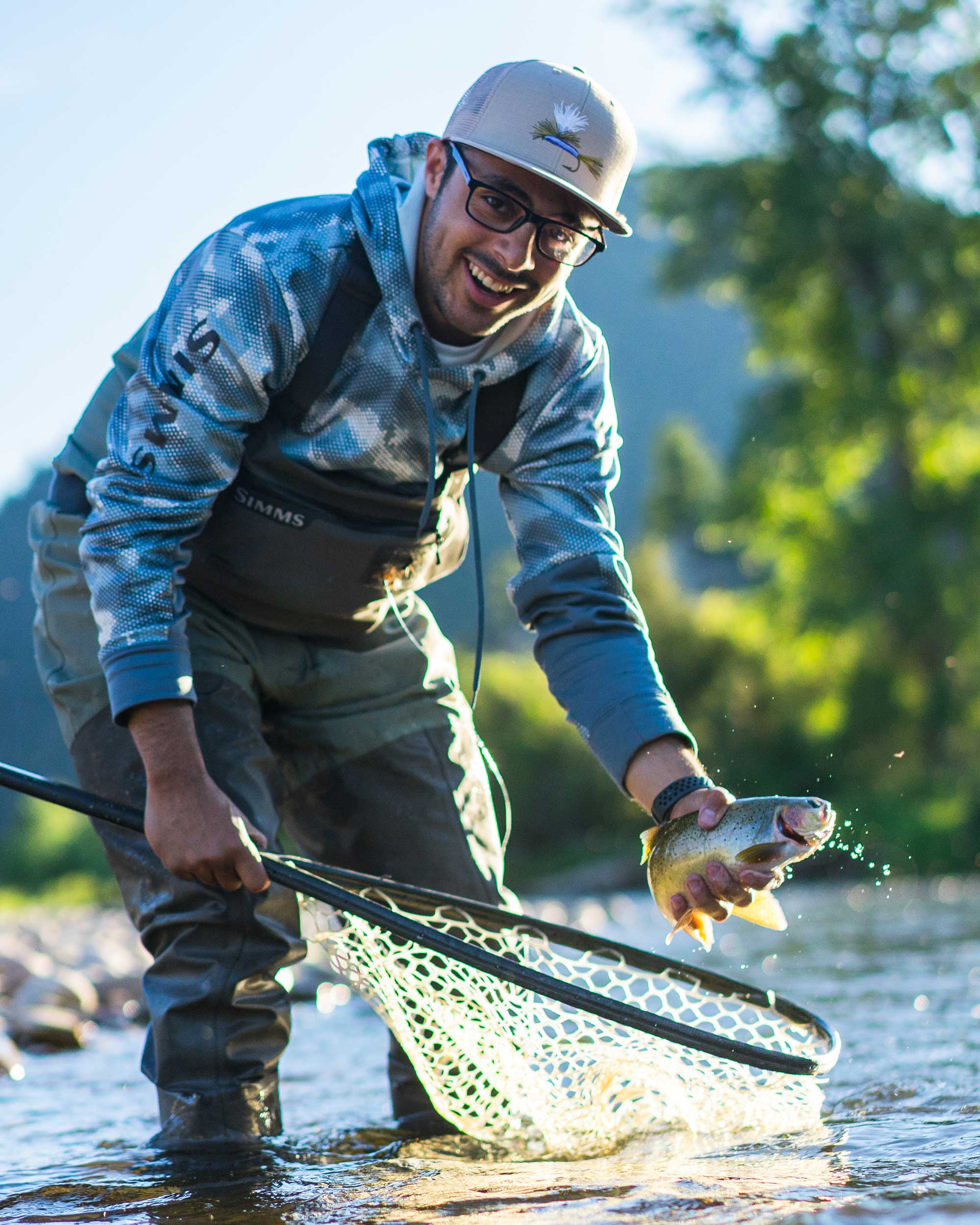 The best souvenir is a great story.

Twice-daily activities are included in your stay. Our all-inclusive rate structure ensures that visits to The Ranch are memorable for their adventures and amenities, not their logistical challenges.

Book Now Inquire
‹ Back to Activities

Experience a one-of-a-kind event that pairs our love of whiskey with our passion for fly fishing. Join us for a weekend dedicated to sipping slow-aged spirits and casting on Blue Ribbon Rock Creek. Absolutely! While we offer everything an angler needs to enjoy our water, we under- stand how nice it is to have your trusted gear. All gear may be shipped in advance to The Ranch and will be waiting in your accommodation upon arrival. The Rod & Gun staff is also happy to assist you if you have questions about what to bring to The Ranch or if you are interested in purchasing gear from the Rod & Gun or certain manufacturers in advance of your trip.

There are six different species of trout living in Rock Creek including cutthroat, cut-bow, rainbow, brown, brook, bull and rocky mountain whitefish. The creek boasts one of the highest fish populations in the state.

Yes. Montana requires that our guests purchase their licenses to fish, in addition to a $10 conservation license and a $15 Aquatic Invasive Species Prevention Pass. Our Rod & Gun staff will facilitate your purchase when you book your stay and plan your activities. Children age 11 and under do not require a license to fish. Non-Resident Montana Fishing License Fees are: 2-day for $50, 10-day for $81 and season licenses for $111.

Fly fishing is a wonderful family activity. The Ranch encourages children of all ages to try fly fishing. It is offered to young guests (ages 4-12) in our Flint’s Forest Rangers Kids Club, and our guides are happy to arrange a family outing with multiple ages.

Fishing from a boat on Rock Creek is not permitted after June 30 per U.S. Forest Service regulations. Our guides and guests often float, walk and wade on many other Montana rivers after June 30. Off-Ranch fishing float trips on rivers, such as the Bitterroot, Clark Fork and Blackfoot can be arranged through the Rod & Gun staff in advance and at an additional cost.

Guests are encouraged to pre-book fishing and scenic float trips to ensure that the dates that you prefer are available and arrangements can be made for you.

Spring | After a long dormant winter, the fish are eager and hungry. Elevated water levels from the snow melt and rising seasonal temperatures cause an eruption of new bug life. This emergence of bug activity creates hungry and active fish.

For The Expert: The most productive method this time of year is known as “nymphing,” a technique where anglers present flies underneath the water to mimic the early stages of a bug’s life. Streamer fishing is at its best during the spring. Salmonfly, skwala, mayfly, stonefly nymph and mayfly nymph species are all represented. Guide Picks: Olive stoneflies, pheasant tails, hare’s ears, San Juan worms, white and yellow streamers

Summer | Warm summer days, crystal clear, mountain-fed waters and big bugs make sight fishing a thrilling experience during this time of year. The summer hatch lasts well into the season when ants and grasshoppers make up the majority of the trout’s diet. Nymphing and streamer fishing can still prove productive, but neither is near as exciting as watching a large native trout smash the surface in pursuit of a juicy hopper pattern.

For The Expert: The dry fly purist will be in heaven on Rock Creek this time of year. The prolific salmonfly hatch comes to a close mid-June and the high summer season begins with the hatch of the golden stonefly. Guide Picks: Golden stoneflies, ants, hopper patterns, beetles, bees, drakes and mayflies

Fall | The weather cools off around mid-September. Fish are bulking up for the colder weather on the horizon, meaning big catches. Crisp warm days can be followed by occasional frosted nights. The leaves along Rock Creek ignite into brilliant golden colors. The lower water levels mean that big holes are easier to fish.

For The Expert: This is brown trout season. As brown trout start to spawn, they become very aggressive and streamer fishing for trophy trout is at its prime. Terrestrial fishing is still very productive. On days when other methods are slow, nymphing can provide persistent production. Guide Picks: Grasshopper and other terrestrial patterns, blue wing olives, may flies, pheasant tails and caddis flies 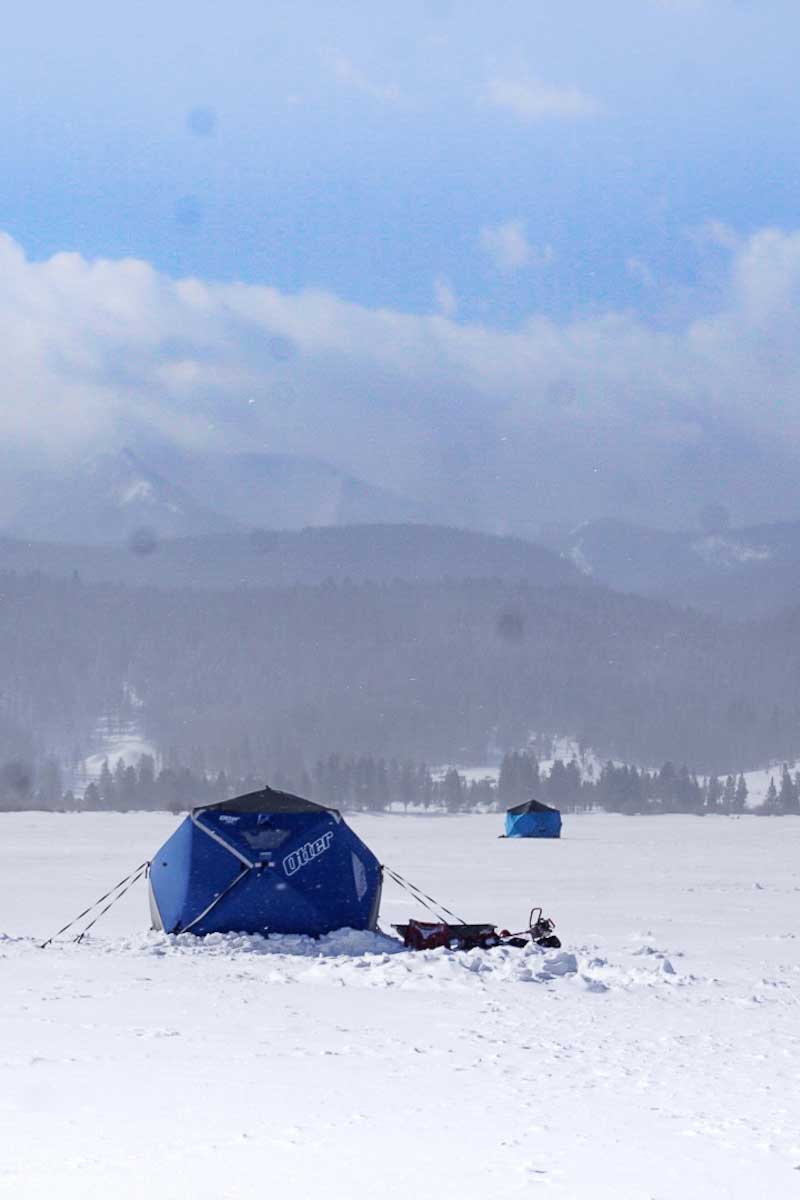 Articles you may find interesting Adventure, Celebrations & Events Cross It Off Your Bucket List 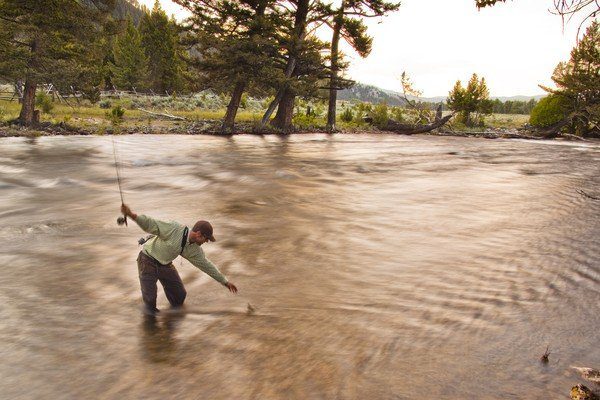 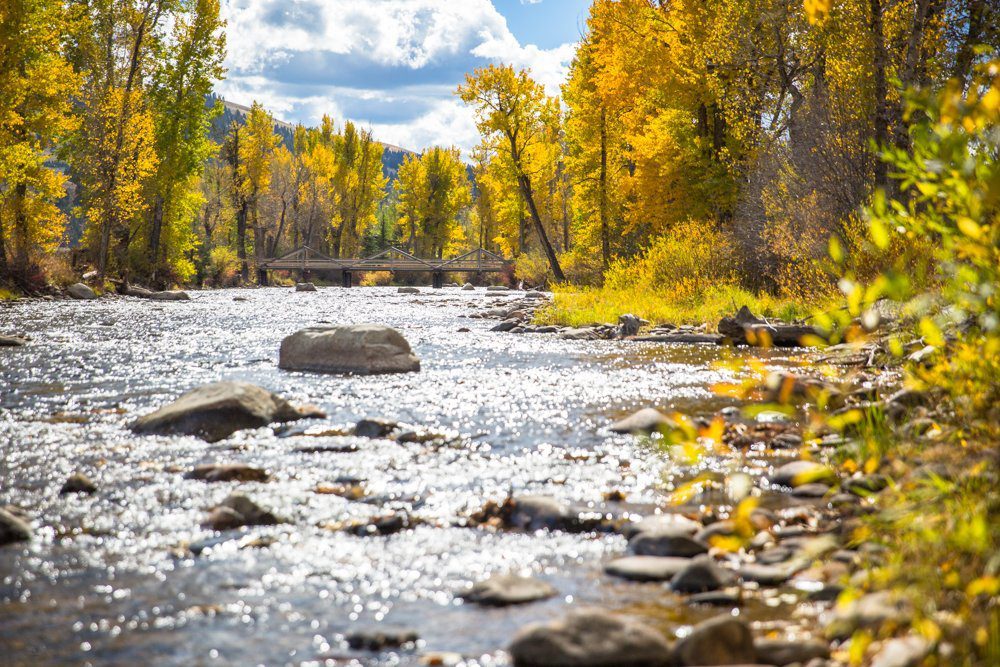